It’s not easy to change the way you conduct your lottery drawings. Players get used to the numbers being drawn in a certain way. So it was a big deal that after decades of conducting draws with a bead draw machine, the U.S. Virgin Islands Lottery this year decided to improve and enhance their lottery drawing process with Smartplay’s Origin Digital Drawing System.

The USVI Lottery is the longest running lottery in the United States. Established in 1937, the lottery is a significant source of revenue for the Islands and contributes millions to programs helping schools, veterans and the elderly.

For years how the USVI lottery employed a lottery bead machine. Bead machines are very popular as a mechanism for generating random numbers especially in Caribbean and Latin American countries. Smartplay has a long history with USVI Lottery, with Smartplay manufacturing their bead drawing systems in 1992 and again in 2005. 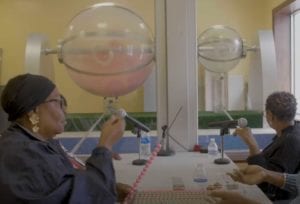 Traditional bead machines were used for many years.

These massive units — while impressive to the eye — required significant manpower to manage. It could take up to a week to organize a drawing and two to four hours to actually draw and count the beads. With the new Origin Digital Draw, the time to conduct the draw was reduced to less than eight minutes.

Raymond Williams, appointed lottery director in early 2019, was ready for a change to increase efficiency while at the same time generate more excitement around the VI Lottery. The increased speed and efficiency with conducting the draw will allow the lottery to eventually add more games, even a daily game.

Marketing Director Victoria Burgess and her team created a series of videos to communicating the value to the dealers and players on making the switch to the new platform. Based on a small focus group, the feedback from the dealers has been that the new system is more trustworthy because there’s less room for human error. As the dealers are the liaison to the community their opinions and attitude towards the drawing is essential. So far, the communication is positive and has resulted in an increase in sales, even with negative impact of the pandemic.

The USVI Lottery is proving that players can adapt to new systems if the benefits are communicated clearly and effectively. Below is the new digital draw sequence created by Smartplay based on footage provided by USVI Lottery.

Here are some additional videos used by VI Lottery to communicate the new draw system and new initiatives to grow the lottery and thus increase support for community programs.

This site uses Akismet to reduce spam. Learn how your comment data is processed.